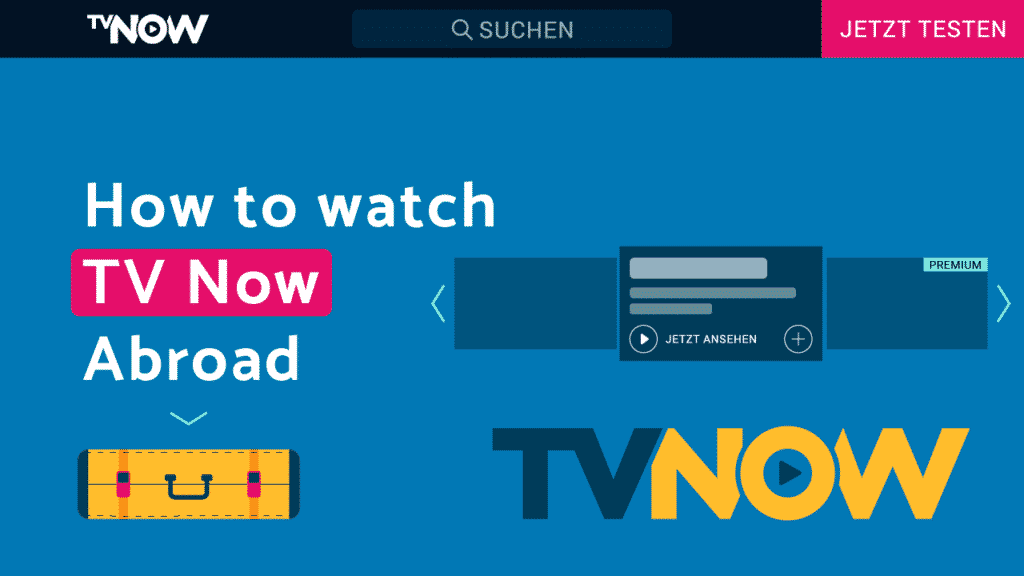 TVNow is a streaming service provided by Mediengruppe RTL Deutschland, also known as RTL. It was launched in 2007. If you have used the service for a long time, you may know it as RTLnow. It was changed to TVNow in March 2016, and it now offers the traditional cable TV experience on a streaming platform.

TVNow allows you access to popular German shows, including Germany Looks for a Superstar (also known as Deutschland Sucht den Superstar) and Alarm for Cobra 11 – The Autobahn Police, (also known as Alarm für Cobra 11 – Die Autobahnpolizei). You can even watch these shows live if you get on the TVNow Plus subscription plan. It will only take you a few euros to start streaming in real-time.

Why is TVNow Blocked outside Germany?

TVNow is only available to users in Germany. This geo-restriction is because the platform is only licensed to distribute content within Germany. If you try to connect to TVNow from any other location, you will receive an error message to that effect.

What this means is that even if you have a TVNow subscription, once you travel outside of Germany, you are cut off. This presents a challenge for German TV lovers who reside outside of the country or travel outside the region frequently.

However, you can bypass this geo-restriction with a good VPN. A Virtual Private Network (VPN) hides your IP address, allowing you to browse privately and access restricted content on the internet. It connects you with a server in your location of choice, in this case, Germany, making it appear as though you are located there. This way, you will be able to freely access content restricted to German users.

The Best VPNs to Use With TVNow

There are many good VPNs, but not all of them can unblock TVNow. So, we have compiled five VPNs with which you can unblock and watch TVNow from outside Germany.

ExpressVPN is arguably the best provider in the VPN market. It has 3000+ VPN servers in 160 locations spread across 94 countries. It has more than 7 servers in the German cities of Frankfurt and Nuremberg. You can connect to any of these servers, making unblocking TVNow a walk in the park.

ExpressVPN secures your data with 256-bit AES encryption and provides DNS, IPv6, and WebRTC leak protection. It has an internet kill switch for when your connection drops. It also has features for split tunneling and a strict “No-Log” policy. The latter policy guarantees that you can browse the internet privately and securely. It also offers 24/7 customer support through live chat.

Furthermore, ExpressVPN has a wide range of protocols. Protocols are the methods through which your device connects to VPN servers. The available protocols include Lightway, OpenVPN, IKEv2, WireGuard, L2TP/IPsec, PPTP, and SSTP. Users can find out which protocols are best for their preferred location and connect through them. Alternatively, ExpressVPN can choose the best protocol for you, depending on your internet connection’s strength.

ExpressVPN apps are compatible with Windows, Mac, and Linux computers. It is also compatible with other operating systems such as Android, iOS, and even routers. ExpressVPN also has unlimited bandwidth, making it ideal for streaming TVNow. Its 30-day money-back guarantee means that you can try it risk-free.

A seeming downside to ExpressVPN features is its cost. Monthly subscriptions are as high as $12.95/month. Also, it only allows five simultaneous connections; unlike some VPNs which offer more connections.

NordVPN is another excellent choice to unblock and stream TVNow abroad. It is based in Panama and has provided VPN services since 2012. A VPN service registered in Panama is undoubtedly the right choice. This is because Panama has no mandatory data retention laws. This, in turn, means that NordVPN’s strict “No-Log” policy is reliable.

NordVPN has 5400+ servers in over 59 countries around the world. Over 241 of these servers are located in Germany, giving you multiple options for rerouting your IP address.

NordVPN uses AES encryption with 256-bit keys. This encryption is combined with IKEv2, OpenVPN, and NordLynx. It also guarantees your online safety over public and unsecured connections, such as public Wi-Fi.

The NordVPN apps are available for Windows, Mac, and Linux computers. They are also available for Android and iOS devices. However, a manual setup is required for routers.

NordVPN has an easy user interface. So, you don’t need to be a cryptographer to use NordVPN comfortably. It also has a 30-day money-back guarantee. Live chat customer support is also available on the website. Furthermore, there are no bandwidth caps.

NordVPN allows users to connect up to 6 devices on a single subscription. Also, a subscription goes for as low as $5.75/month.

CyberGhost has been operating out of Bucharest, Romania, since 2011. Just like NordVPN, CyberGhost is located in a country known for privacy-friendly laws. This location means that it can stand by it’s strict “No-Log” policy.

It has 6200+ servers in 90+ countries globally, unlimited bandwidth speed, and 24/7 customer service. Out of this number, over 690 of these servers are located in Germany. You will hardly ever run out of options for servers to connect to in order to stream TVNow. The CyberGhost app gives you a list of the best servers for streaming, helping you connect to the best server for streaming on TVNow.

It uses the AES 256-bit technology and an automatic kill switch for user data protection from cybercriminals. This VPN even guarantees security on unsecured and public networks, such as Wi-Fi networks. It also uses IKEv2 (Internet Key Exchange version 2) and WireGuard for further protection.

The CyberGhost app is compatible with Windows, Android, Mac, Linus, iOS, Android TV, and Amazon Fire Stick. CyberGhost accepts payment in cryptocurrencies, including Bitcoin, unlike most VPNs. Also, one subscription plan allows you to connect up to 7 devices simultaneously. It also unlocks several other streaming platforms.

Hotspot Shield is another good VPN for streaming TVNow abroad. It has 3200+ servers across 80+ countries. With servers in German cities, this VPN service is perfect for streaming German content on TVNow.

Hotspot Shield uses a single VPN protocol – the Hydra protocol. When you connect to any Hotspot Shield VPN server location, it automatically selects the best VPN server for you with this protocol. However, this doesn’t take away your ability to choose your preferred server and location manually.

Like all other high-quality VPNs, Hotspot Shield has a strict “No-Log” policy. So, it doesn’t store information about your digital activities. It uses the AES 256-bit military-grade encryption to protect users from hackers and cyber predators. It also has a high-speed bandwidth, which should eliminate buffering while streaming.

Hotspot Shield has a 45-day money-back policy, which is better than what is offered by most other VPNs. Besides the longer guarantee, Hotspot Shield has a 3-year subscription plan for as low as $2.99/month. So, this VPN is undoubtedly one of the cheapest around.

More so, Hotspot Shield lets you connect up to 5 devices on a single subscription; and it has 24/7 live customer support via chat. The Hotspot Shield app is available on the major platforms, including Windows, MacOS, iOS, Android, Linux, Smart TVs, routers, and many more. So, you can use this VPN on most devices.

Private Internet Access (PIA) is a VPN service based in the US. Even though PIA is located in the US, it has demonstrated its zero-log policy in court. PIA allows you to bypass internet censorship and unblock restricted sites and content. It also has unlimited bandwidth, which guarantees speedy browsing. There is also an Ad-block feature, and it is compatible with all the standard desktop and mobile operating systems.

PIA has about 11254 servers in 95 locations across 74 countries, all with unlimited bandwidth speed. Specifically, PIA has 393 servers in 2 locations in Germany.

Furthermore, PIA has a money-back guarantee following a complaint and refund request within 30 days of subscription. For security, PIA combines OpenVPN, PPTP L2TP/IPSec, and WireGuard. Also, it only uses bare metal servers for VPN networks to guarantee enhanced security.

PIA boasts of an easy user interface. It also allows you to connect 10 devices simultaneously. The subscription offer is currently at $2.69/month subscription for two years. However, single month subscriptions are as high as $11.95; and $3.33/month for one-year subscriptions. It also accepts payment in cryptocurrencies, including Bitcoin. PIA even has an option of payment with gift cards.

At this point, you may be wondering if using a VPN is legal. So, yes, using a VPN is currently legal in Germany. There is no law that currently prohibits its use. Thus, connecting to a VPN’s server in Germany will come with no hassles. However, it becomes illegal where the VPN is used for an unlawful act.

It is also necessary to check if using a VPN is legal in your actual location. Using a VPN is illegal in Belarus, North Korea, and Iraq. There are also countries where operating a VPN is legal but heavily restricted and monitored. These countries include the United Arab Emirates (UAE), Russia, China, and Turkey.

What to Look Out for in a VPN

If you aren’t a techie, you may find it challenging to choose a good VPN. So, the essential features you should look out for when choosing a VPN are discussed below.

Using a free VPN may appear attractive, but it is dangerous. This is because a free VPN provider may infringe on your privacy and sell your data to third parties. VPN services are costly, what with maintaining numerous servers around the world. So, a VPN provider should charge for its services. If they’re not charging you, they’re getting funds elsewhere, such as selling your private information to third parties.

Although pricier, TVNow is one of the best TV streaming platforms. This is what makes it sad that you can’t stream TVNow when you are outside Germany. However, with the aid of the VPNs listed above, you can securely stream great content on TVNow anytime you are abroad.