Torrenting is a kind of peer-to-peer (P2P) file-sharing. Multiple users that want to download a torrent file get connected, download different bits of the torrent file, and the downloaded bits get shared amongst all users till everyone has the whole file. With respect to that setup, anonymity, and security is out of the window. Also, most torrented files are copyrighted. If you’re caught torrenting a copyrighted file, you might face legal penalties.

To stay anonymous while torrenting, most people use Virtual Private Networks (VPNs). A VPN helps to mask a user’s IP address, hence, giving a decent security level to avoid infiltration by hackers and other cyber crooks.

This article focuses on Reddit reviews on the best VPNs to use for torrenting. Reddit, being an informative question-answer/news platform, houses top recommendations from users’ experiences about what is a hit, average, and a miss. Reddit covers a wide range of topics, including privacy. To that effect, Reddit is one reliable place to get the most trusted information about your privacy while torrenting.

People will definitely have different views on issues, especially when it depends on personal experience. This article has sorted out reviews for the VPNs with the highest Reddit upvotes. These VPNs have been tested to be top-notch in guaranteeing the privacy of users while torrenting.

Five(5) of the best VPNs for torrenting as extracted from Reddit are fully discussed as follows:

ExpressVPN is a highly rated VPN amongst Reddit users. This VPN has been known to deliver one of the fastest speeds in the industry. With that, when you download a torrent, you enjoy swift connection speed. Redditors who have used ExpressVPN to download torrent had only good news about their experience.

In addition to that, ExpressVPN has many legacy features that point to assured security and privacy. When you connect to one of its servers, the VPN masks your IP address with a virtual one, which appears to hackers, government agencies, and your Internet Service Provider (ISP). So in the actual sense, your real IP address is secure. ExpressVPN doesn’t keep a track record of what you do online, and it does a great job in encrypting your traffic data with the uncrackable military-grade encryption. 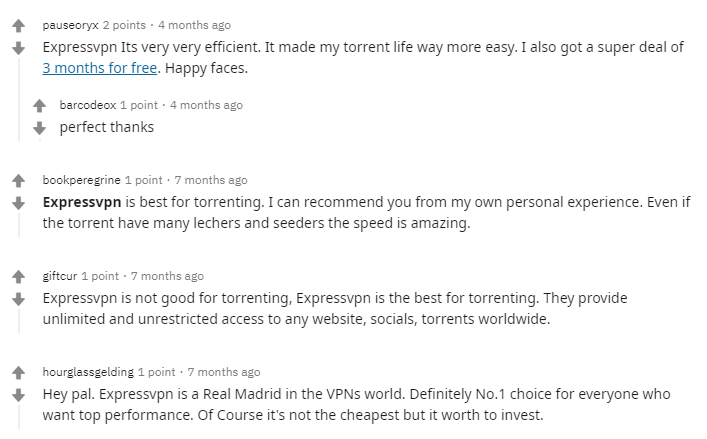 The Redditors above mince no words while praising this provider. Also, this VPN service uses a highly secure VPN protocol— OpenVPN in conjunction with a Hash-based Message Authentication Code (HMAC). The code shields your data from spooky eyes while it’s being transmitted. These features are integrated into the VPN to help users enjoy top-tier cyber protection, especially while torrenting. Reddit users believe ExpressVPN has been successful in delivering such anonymity.

This VPN service has a kill switch that trips off your network when you lose contact with the VPN server. The essence of the kill switch cannot be overemphasized because it prevents cyber crooks from taking advantage of that moment of disconnection.

ExpressVPN has apps for the frontline operating system, and its software has a user-friendly interface.

The best publicity is to deliver top-notch services consistently. Beyond any iota of doubt, NordVPN is one of the most popular VPN providers with Reddit users, and it’s not surprising given how fantastic this VPN service is. NordVPN is best known for its commitment to delivering the “best of all”. The Redditor in the review below gives an accurate assessment of NordVPN’s prowess when it comes to torrenting.

This VPN service has over 5,500 servers, all optimized for torrenting. Multiple Reddit users claim they had no problems at all while downloading torrents, especially with speed. In support of P2P file transfer, NordVPN has a series of privacy and security features integrated into that course. The VPN service encrypts traffic data with the most potent known encryption standard— 256-bit Advanced Encryption Standard (AES).

Also, NordVPN routes your connection via two servers to give you protection twice as strong. It also stands firm by its no-log policy as it doesn’t keep a record of your online activities. It further uses the Onion Over VPN routing all in a bid to help maintain a secure connection. Furthermore, NordVPN has a CyberSec feature that blocks out ads and malware so that you won’t have interruptions while torrenting.

This VPN service has products available to Android, Windows, iPhone, Mac, and Linux users. Irrespective of your active device, you’ll always get an option to use this VPN. You can also protect up to 6 devices with just one NordVPN subscription. Reddit users believe NordVPN is intentional with its privacy features to help you maintain anonymity all through your torrenting.

Surfshark is known as one of the most affordable VPNs. They offer so many discounts on their subscription plans from time to time. Discounts on already low price tags seem really attractive, but some Redditors were unsure if Surfshark actually offered premium and top quality services. Well, experience, they say, is the best teacher, and Redditors that have used Surfshark before came to the rescue. It is appealing to know that Surfshark is a privacy-oriented VPN. 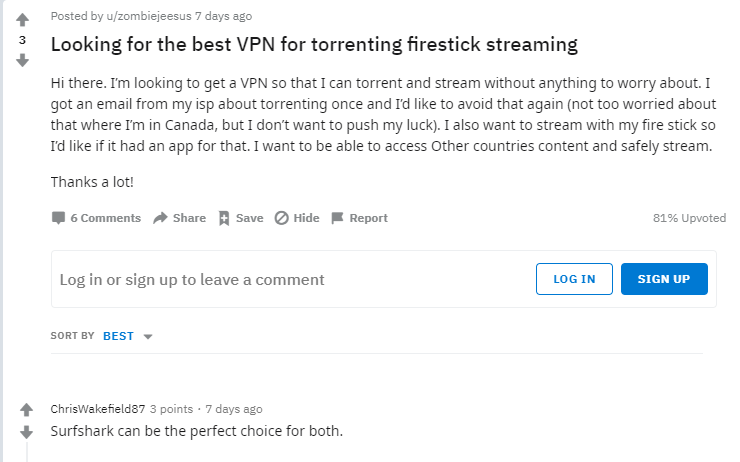 From Reddit testimonies, Surfshark servers are incredibly fast and well optimized for downloading torrents. Above, a Surfshark user was emphatic about the VPN’s use for torrenting on Firestick devices.

The VPN service even has security features that help users stay invisible while torrenting. Before transmitting your data, Surfshark encrypts it with AES-256. With that level of encryption, hackers won’t be able to read your data and can’t infiltrate your connection.

In addition, the VPN uses IKEv2/IPsec VPN protocol by default, but you can use the OpenVPN protocol by changing it on the app. Redditors have confirmed that none of these protocols lags in keeping your connection secure.

Surfshark operates a strict no-log policy, uses a kill switch, and has a MultiHop feature that connects you through several servers to promote security advantage. When you get connected to this VPN, your IP and Domain Name System (DNS) get protected by its leak protection features. And Reddit users compliment the CleanWeb feature on Surfshark because they didn’t encounter interruptions by ads and those pop-ups.

Surfshark also has applications for various device types and even browser extensions. This is yet another highly secure VPN that is torrent-friendly and offers unlimited bandwidth of data. It’ll be very difficult for Redditors not to approve this.

ProtonVPN has its headquarters based in Switzerland. That itself puts it in the good books of Reddit users because Switzerland is known to have some of the best privacy laws across the globe. Switzerland is not part of the 14 Eyes Surveillance Network and is not under the European Union and the United States jurisdiction. To that effect, the international community can’t even compel them to sneak up on your privacy.

This VPN provider has a free mode and three paid subscription plans. Reviews on Reddit have that you cannot torrent on the free mode because the servers are not optimized for P2P transfer. However, torrent-safe servers are available on the paid plans. A Redditor asked the community how to identify the torrent-safe servers, and ProtonVPN joined the discussion to help clarify. There’s a P2P icon on the application; when you click it, you automatically get connected to a server that supports torrenting.

Despite having those servers, ProtonVPN has other privacy features that help to cement your anonymity further. The provider uses the 256-bit AES, which is currently undefeated. The company specifically spelled out their Perfect Forward Secrecy policy on the website. The approach ensures your traffic data remains secure in the future, even if the encryption key gets compromised. 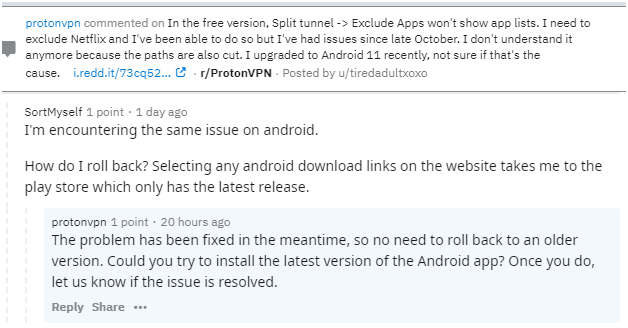 While torrenting, this provider quickly attends to any challenge that you have as seen in the trail of discussion above. Furthermore, ProtonVPN has DNS leak protection, kill switch, and Always-On features. The VPN service claims to use only protocols confirmed to be secure (IKEv2/IPSec and OpenVPN). Even though ProtonVPN inputs such a level of security and privacy efforts, Reddit users say it is still a high-speed VPN.

From the name, you can easily tell where this VPN service has its eye on— Privacy. Redditors recommend this VPN to each other based on its very decent offers over the years. Private Internet Access (PIA) has a great reputation for offering top-notch privacy and security in its services. The Redditor below goes straight to the point in their review of PIA’s effectiveness for torrenting:

PIA has servers that are very reliable for torrenting. So, you can download those torrent files you’ve been eyeing for a long time without having to worry about your anonymity. In response to another user’s question, a Reddit user stated that he has been using PIA to download torrents for up to 5 years without privacy or piracy issues. So, you have the best at your beck-and-call.

The VPN does not log any of your records as you torrent. A few people think that might have changed since the change of ownership of the VPN company. However, a PIA user commented on Reddit that the credibility stands because nothing has changed from the efficiency of the previous ownership. So the VPN is still very much credible.

PIA uses a kill switch technology, 256-bit AES, and IP leak protection. Some Reddit users complained about inconsistencies in speed, but the slowest rate is still above average and won’t slow down your torrent downloads.

Features Reddit Users Consider When Reviewing a VPN for Torrenting

VPNs have a variety of characteristics, and users perceive the services via different lenses. However, top VPN gurus on Reddit have a set of features they look out for before making a recommendation. They are;

To start with, some VPNs do not support torrents. For those that do, despite having thousands of servers across different countries, not all those servers are torrent-safe in some cases. VPN providers separate torrent-safe servers from the rest in different ways.

Using a regular server to download torrents will compromise privacy and might land you in trouble. So Redditors take the pains to locate the VPNs that support torrenting by default.

Even if a VPN claims to support P2P sharing, Redditors look out for the measures put in place by the VPN provider to secure anonymity.

These measures range from the provider’s data-logging policy and encryption standard to kill switch, leak protection, and security protocols.

Well, what good is it if you subscribe to a VPN that doesn’t have software for your device?

Even though torrenting is the primary target, users look out for VPNs that can do more (like streaming geo-restricted content), so they can get multiple uses on one VPN package.

How to Set Up a VPN for Torrenting

The VPN does the bulk of the work in making sure its servers are engineered to support P2P file sharing and guarantee the security of your connection while torrenting. Taking the final lap, setting up a VPN for torrent use, is as simple as it can be.

Navigate through the highlights below to get on the road.

2. Pay for a subscription plan: Review the various plans available based on duration, services available, and of course, price tag.

3. Download the app: Install the VPN software from your device’s app store. Alternatively, you can get it directly from the VPN site after subscribing.

5. Connect to a torrent-safe server: Identify a server optimized for torrenting purposes, and connect.

5. Customize connection and interface: Toggle advanced features, set options on or off, and make changes to your taste.

7. Torrent to the max! Minimize the VPN app, and embark on your torrent mission.

Reddit is a platform enabled by user-generated content, so it will be difficult for it to be biased. Users interactively engage themselves and make recommendations based on their perception of the product. The reviews in this article are reliable because they are a real-time reflection of what the VPN articulates.