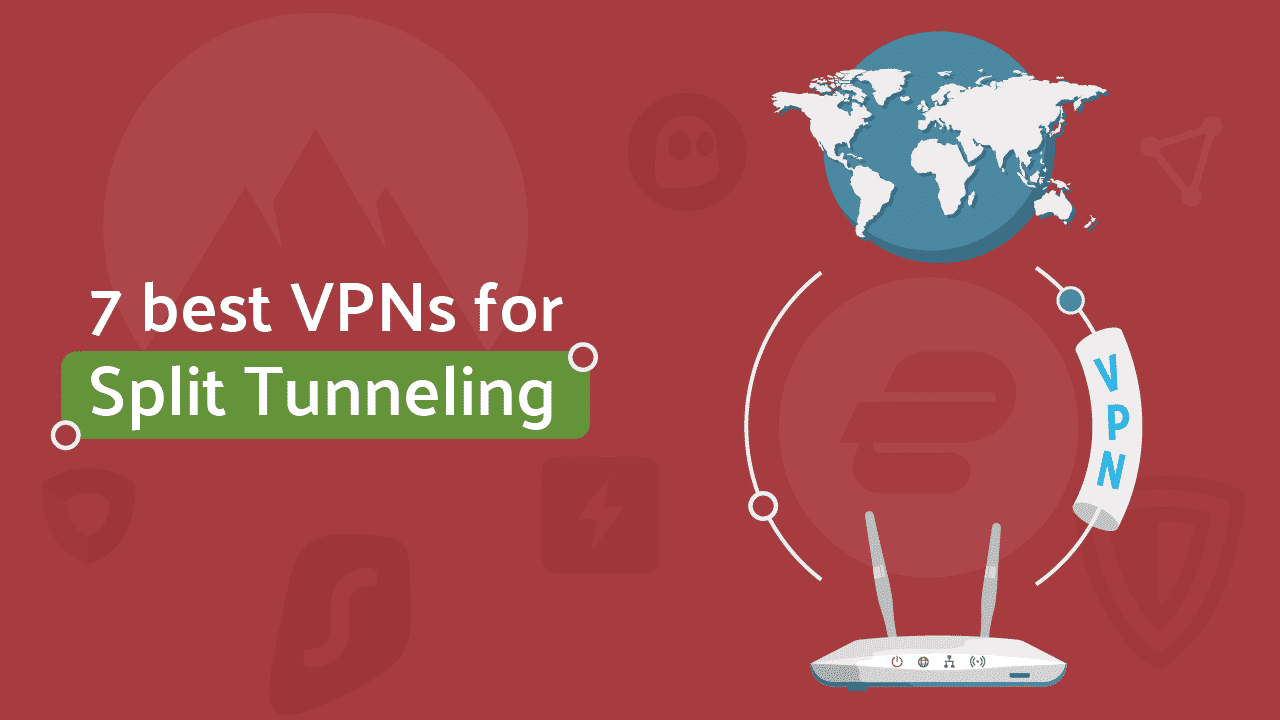 With privacy being an increasingly concerning issue in the cyber world, the use of Virtual Private Networks (VPNs) has been at an all-time high. A VPN masks a device’s IP address in a bid to establish anonymity, giving the user a private and secure connection. Also, VPNs are widely known for unblocking geo-restricted content on streaming platforms, social media sites, and other web platforms.

Split tunneling is a phenomenon where part of your internet traffic is channeled through the VPN service, while the other part accesses the web directly without the VPN intermediary. The feature can be used for various forms of effects, but the mechanism remains the same.

This section discusses the best VPNs that offer split tunneling. It also points out other features worthy of note. Here we go!

ExpressVPN is popular amongst VPN enthusiasts and will easily take the number one spot on almost every list. It has an excellent setup for its split tunneling feature. This VPN provides the feature for Mac, Windows, and Android users.

The VPN’s split tunneling works in two different ways. The mode in which your traffic is tunneled is totally up to you. Firstly, ExpressVPN’s split tunneling routes all connected devices and applications through the VPN, excluding the ones you toggle otherwise for. Alternatively, the inverse split tunneling protects only the devices and applications you have selected. The majority of the VPNs in the market today use either of the two modes, so it is a standout feature for ExpressVPN to make the two options available.

ExpressVPN also has software for routers but integrates a different kind of split tunneling. It specifically lets you select the devices you want to protect via the VPN service. Also, you can opt for any of its browser extension apps to exclusively protect your browser traffic.

This VPN has over 3,000 servers in about 160 locations in the world. Those servers are high-speed and are optimized to support streaming and P2P file sharing. ExpressVPN has a kill switch, DNS leak protection, uses military-grade encryption, and doesn’t keep records of your activities online. Lastly, ExpressVPN allows you to connect up to five devices to just one subscription.

This VPN is another well-recognized VPN amongst the top-tier VPN providers in the world. It has applications available for Windows, macOS, Android, iOS, and Linux devices. However, the split tunneling feature is only available on the Android app for now. They promise to get it on the apps for other operating systems soon.

You can restrict your device’s apps from accessing the internet through the VPN connection by simple navigation clicks. Even though the VPN has the feature only on the Android app, you can get Chrome and Firefox (extensions).

NordVPN comes with a fantastic set of privacy and security features on all its 5,500 jet-fast servers. The VPN operates a no-log policy, has leak protection, a kill switch, secure protocols, and the Onion-over VPN service. It also has a DoubleVPN feature that encrypts your connection through two servers and a SmartPlay feature that eases you into the luxury of seamless streaming. Finally, NordVPN blocks ads, and you can protect six devices simultaneously with one subscription plan.

Surfshark offers an advanced goody of split tunneling modification. The company calls the feature a Whitelister. Even though the VPN has apps for various operating systems, the Whitelister feature is only available to Android and Windows users.

The Whitelister allows you to select apps you want to bypass the VPN encryption. So when you whitelist an app on Surfshark, you’re giving it the pass to access the web directly. Surfshark goes the extra mile to provide options for whitelisting websites. You get a tab to whitelist apps and another one to input URLs you want to whitelist. Amazing, right?

As much as Surfshark doesn’t have apps for other device types, mac and iOS users can still benefit from the whitelisting capabilities of Surfshark’s browser extensions. Frankly, you won’t get the precision of selecting apps or websites, but you get to encrypt only the traffic emanating from your browser, leaving other apps to bypass the VPN service.

Surfshark encrypts connections with 256-bit Advanced Encryption Standard (AES) and also has a MultiHop feature that routes your traffic through multiple servers for additional protection. When you connect to any of its 3200+ servers, you get to enjoy the services of a kill switch, malware and ad blocker, DNS leak protection, and a NoBorders mode that removes the regional restriction on the content. Surfshark does not log your traffic data and puts no limitation on the number of devices you can protect at once.

ProtonVPN has its headquarters in Switzerland. It is essential to mention the headquarters, unlike other VPNs, because Switzerland has one of the most robust privacy rules. No company will be put under pressure by the government to compromise your privacy, which keeps you at another anonymity level.

This split tunneling feature on this VPN service is only made available for Windows and Android users. In this case, ProtonVPN lets you select the applications and IP addresses (devices) that you want to exclude from the selective tunneling. The selected apps and devices are on the VPN-enabled device, but they do not access the internet via the VPN service.

The feature is still relatively new to ProtonVPN, so if you’re going to get it, you should download the latest version for your device. Also, the VPN company recommends that you report bugs (if any) to improve on the software and make it better for use. With ProtonVPN, your privacy is guaranteed, so if someone else can access your IP address, it’s because you’ve excluded the device from the umbrella of ProtonVPN.

The VPN has over 1,200 servers in 55 countries. You also get Perfect Forward Secrecy and no-logs policies in conjunction with the most substantial encryption detail possible. It also has a kill switch and an Always-On feature to keep you connected at all times. ProtonVPN allows the connection of up to 10 devices at a time.

The name of this VPN brand might seem controversial at first, but in context, it mirrors top-class privacy. HideMyAss (HMA) has software apps for all significant device platforms— Android, macOS, iOS, Linux, and Windows. It also has software for the Router.

HMA gives you the freedom to choose which of your device’s applications go through the VPN. That directly implies that the other apps will be unprotected, but at least you’ll be able to access your local online stores without having to switch the VPN off every time.

Many users get a VPN for their router and connect their devices (including a game console). However, when you connect to a server abroad, you won’t be able to play games online with your local friend. Split tunneling deals with that issue and allows you to leave your console out of the VPN tunnel. When you want to compete with friends abroad, you just have to turn off the split tunneling feature. Like other VPNs on this list, HMA has browser extension apps for strict and exclusive split tunneling.

This VPN service has an IP Shuffling feature and a Distributed Denial of Service (DDoS) attack protection. It has a smart kill switch and operates a duly audited no-logs policy. HMA has 1100+ servers in over 290 locations worldwide, encrypts data with the best-in-class AES-256, supports torrenting, and allows up to 5 device installations at a time.

CyberGhost is a great VPN, and it is widely known for its ease of use. Like other VPNs on this list, CyberGhost has the split tunneling feature for Windows and Android-powered devices. This VPN service is easily one of the best split tunneling VPNs.

Based on the basic principle of split tunneling, you get to funnel only a set of selected apps, websites, and devices through the VPN encryption tunnel. Not all split tunneling VPNs allow specific website tunneling; that gives CyberGhost an edge here.

To split-tunnel apps on your device, you have to untick the boxes in front of the apps to allow the unticked apps to bypass the VPN tunnel. Also, CyberGhost has an option that allows newly installed apps to be protected automatically, without you having to select the app specifically. That means if you choose not to “protect the new apps,” newly installed apps will access the internet directly.

In addition to its split tunneling prowess, this VPN service uses AES-256, leak protection, top-tier security protocols, and it doesn’t keep a data log of online traffic. All its 7,000+ servers are relatively stable, yet it has a kill switch as a precautionary measure. With CyberGhost, you can connect a maximum of 7 devices at a time.

IPVanish has applications for various kinds of device types, but the tunneling feature is only available to two Operating System (OS) types. If you’re an Android user, IPVanish has a split tunneling feature for you, and just the way it should be, some apps run via the VPN while others don’t. It also has the feature available for Amazon Fire Stick (or Fire TV). In that sense, you can check your local bank account and still watch your favorite live shows abroad.

This VPN directs selected traffic through its virtual tunnel to the internet client. In the split tunneling section of the app, you get a list of all the apps on your device. When you mark the respective boxes in front of the apps, IPVanish excludes the ticked apps from the VPN tunnel. The unmarked apps are channeled through the VPN service. Easy as it comes.

IPVanish has 1,600+ servers (with over 40,000 IP addresses) that provide unthrottled speed up for grabs. Connection to any of those servers guarantees military-grade encryption, and its SOCKS5 web proxy keeps you anonymous and enhances your torrent download experience. IPVanish runs a no-logs policy and uses secure protocols (IKEv2, OpenVPN, and L2TP/IPsec VPN protocols).

It also has the ability to unblock geo-restricted content and deliver seamless streaming. This VPN grants you the luxury of connecting up to 10 devices to one subscription plan.

Why Would You Need a Split Tunneling Feature?

A split tunneling feature can come in handy for a couple of reasons depending on individual needs. Privacy is one of the reasons why users look out for a split tunneling feature in VPNs. You may want to access geo-blocked content via a VPN-tunneled IP address and generate double traffic from your device, making it virtually impossible for hackers, snoops, and even government agencies to “fish” you out.

Also, bear in mind that you can use this feature for “multitasking” on a single device. Multitasking comes in the sense that you (in Asia) want to stream a show exclusive to Netflix US and access your Japanese bank account. With split tunneling, you can do all that without having to connect and reconnect to the VPN service now and then.

As much as this review points out the pros of using the split tunneling feature, you should be careful about the security compromise you might be settling for. Be sure there are no extreme consequences to excluding an app from the protection of a VPN. You should know that the apps that access the internet directly are not subject to any form of encryption. But in some regular cases of local shopping online and checking your bank account, split tunneling helps a lot.