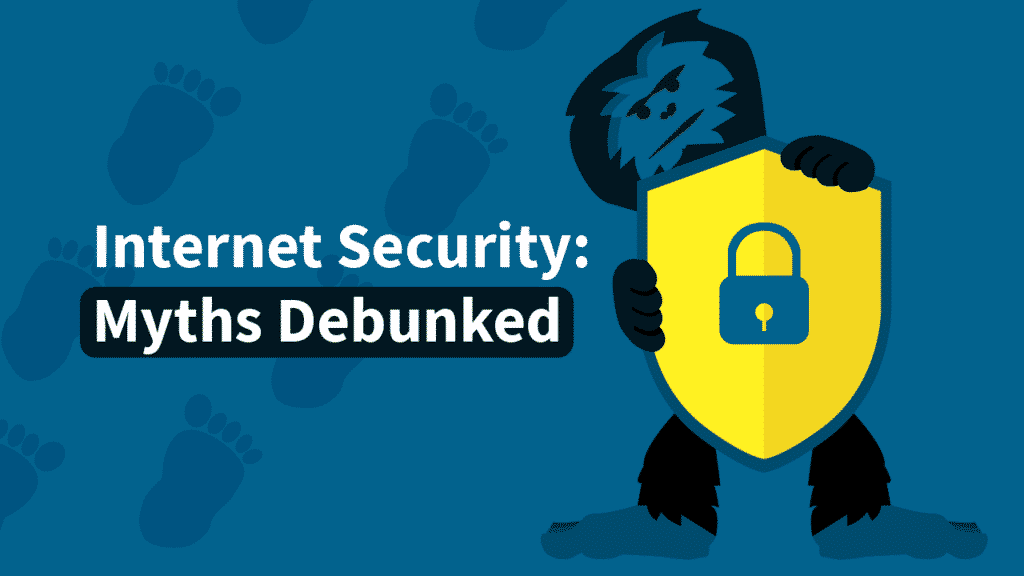 The internet is one major necessity the world cannot do without in this present day. We rely on it for just about everything, from communications and interactions to healthcare and business.

This importance has also made it a daily target for people looking to make a quick buck. Identity theft, hacks, malware, and more are threats that internet users have to face daily. Whether you’re merely checking through social media or making payments for a service, you need to be vigilant at every point.

However, some people also seem to have a wrong notion of cyber threats and security. In this article, we’ll look at some of the common myths circulated about staying safe online.

1. “Hackers and Cybercriminals Can’t Target Me”

It’s convenient to want to believe that you’re just an everyday Joe, and hackers won’t be interested in you. You’re not Jeff Bezos. You don’t have billions that hackers will want to steal from. Right?

Wrong. Many people believe that the internet is so vast, hackers won’t care about them. Even if someone attacked them, there wouldn’t be much to take. Security experts call this belief “Security through obscurity.”

However, beliefs like these usually end in hacks anyway. It’s not about who you are — it’s about what you have. Hackers will take anything they can find. In a world where data is becoming more valuable, these people can sell anything they have on you for money.

A hack can still exploit the little available information about you. Stop thinking that you’re too small or not rich enough. As long as you have an identity on the internet, you’re a potential target.

Yes, security experts recommend that you set strong passwords. However, this isn’t the entire thing. Having a strong password won’t be enough to keep the cybercriminals away.

Several hack methods have almost rendered passwords ineffective. There are social engineering attacks, where hackers trick people into giving their information away. Some hack attempts are also sophisticated and can decrypt your passwords in minutes.

This is why security experts recommend that you have two-factor authentication where possible. A second security layer will help protect your data and prevent hackers from breaking into your files.

You should also make sure that you use unique passwords. Using the same password for all your services means that you’re in deep trouble if a hacker finds a way to break through one platform. They’ll try just about everything else, and if the same password checks all, you could be in real danger.

Long, complex passwords can be a chore to remember. You can write them down, but don’t do so on your phone or your computer. Don’t even write the password on an email draft. Instead, get a password management software to keep them all. This way, a hacker who gains unauthorized access to your device still won’t get your passwords.

3. “A Security Application is Enough Protection”

Many have also applied the “set it and forget it” philosophy to antiviruses. It’s convenient to believe that antivirus software will always protect you from cybercriminals, but this isn’t true.

While it’s critical to have an antivirus, you need more than that. You will need a program with protection and threat detection systems. This way, it knows when someone is trying to break into your device or online profile and respond accordingly.

Some hackers are so good; they’ll crack your antivirus. Without these checks in time, they could make off with your data, and you wouldn’t even know a thing.

4. “I’m Fine as Long as I Don’t Access Unsafe Locations”

Many people believe that not going to unfamiliar sites on the internet is the key to safety. On the surface, they’re right. However, different forms of malware can affect your device.

Cybercriminals can now exploit safe websites and insert malware into things like ads. So, you could click on a Facebook ad and open your computer to malware. Being safe online is like driving a car. While you can know the basic driving rules, there are still dangers no matter what you do.

As it is with checking only legitimate websites, this is another area that you can’t predict. It’s easy to only open emails from your friends and sources that you know, but email spoofing has become pretty easy these days.

For someone who doesn’t know how to spot suspicious emails, all it takes is one click for malware to infiltrate the device. You click or download an email attachment, and you find that your device stops functioning normally.

We all have to stay safe while online. Part of staying safe is understanding what risks are real and which ones aren’t. By understanding these myths discussed above, you have a clearer idea of what you may be exposed to as you surf the web. We also have presented ways you may use to improve your internet security experience.